In trying to broaden my reading horizons, I conducted an experiment in which I chose books from the library based ONLY on the cover. I didn’t read the back and I tried not to pay attention to the name or gender of the author.

Like most experiments, the results were mixed. However, one of the bunch stood out, and that was THE GIRLS AT THE KINGFISHER CLUB by Genevieve Valentine. 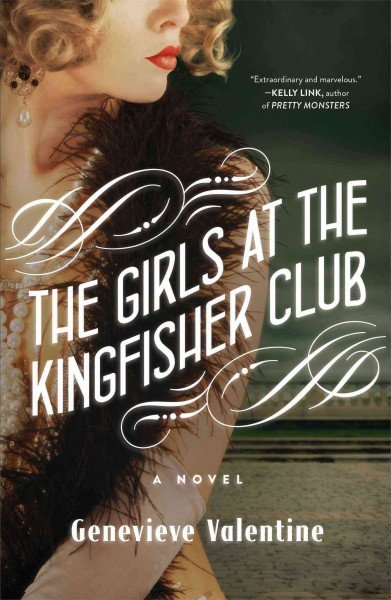 Jo, the firstborn, “The General” to her eleven sisters, is the only thing the Hamilton girls have in place of a mother. She is the one who taught them how to dance, the one who gives the signal each night, as they slip out of the confines of their father’s Manhattan townhouse and into the cabs that will take them to the speakeasy. Together they elude their distant and controlling father, until the day he decides to marry them all off.

The girls, meanwhile, continue to dance, from Salon Renaud to the Swan and, finally, the Kingfisher, the club they’ve come to call home. They dance until one night when they are caught in a raid, separated, and Jo is thrust face-to-face with someone from her past: a bootlegger named Tom whom she hasn’t seen in almost ten years. Suddenly Jo must balance not only the needs of her father and eleven sisters, but her own as well.

At the moment, there are two kinds of books I’m obsessing over: really thought out, well-written thrillers with mostly-female casts and creative fairy-tale retellings. Though THE GIRLS AT THE KINGFISHER CLUB has none of the magical realism elements I’ve come to expect from retellings, this book sits near the top of my list of favorites.

Valentine’s inspirations are pretty clear: Hans Christian Anderson’s Twelve Dancing Princesses (a tale that deserves more retellings than I can find) and Louisa May Alcott’s LITTLE WOMEN. Eldest sister, Jo, shares not only Jo March’s name, but also her determination and fierce protective instincts over her sisters. She’s a character that is easy to rally behind.

Another note on character, it’s pretty typical in novels with large casts to lose characters in the hustle of the plot. They either fall to the wayside or become nondescripts alongside the other, more shining characters. Valentine was able to give life to each of the twelve sisters in a way that made them real in the reader’s eyes. Jo may have been the MC, but younger sisters Rose and Doris were the most relatable to me and I felt their plight as more fervently that Jo’s.

If I have one criticism of THE GIRLS AT THE KINGFISHER CLUB, it’s that everything seems to come a little too easily for most of the book. Each time the sisters sneak down the back stair, the tension is diminished when time and again, they aren’t caught. In fact, aside from a light-sleeping maid, there aren’t even any close calls. Considering most of the fear the sisters bear comes from what their father would do or think should he catch them, the fear becomes less pressing. SPOILER…… When they are inevitably caught (not in the act, but accused after the fact), what should have been a knife to the chest is more like needle prick.

Overall, though, I really enjoyed this book despite its lack of traditionally magical elements and, possibly, because of it as well. I recommend it highly.